Colloidal Silver by The Amber Tree

What is silver colloid?

There are primarily three types of colloidal silver available on the market today.

The first being ionic silver, which is the most commonly sold and cheapest to produce. Most of the content is silver ions (90%), whereas 10% of the solution is actual silver particles. This type of silver may be easy to produce but is not touted as a true colloidal product, and therefore is stated to not be as effective.

Standard ionic silver is best used for external applications because when it is taken, it converts into silver chloride when it encounters body salts. This means the silver will be expelled from the body, and the silver colloid won’t work as effectively. It is possible that if this type of colloid is consumed in concentrated form, it could cause argyria, a permanent discolouration of the skin. 3 A higher quality product with more particles in suspension is more effective when ingested.

The next silver available is called silver protein, which contains large particles of silver. It is produced by adding water to silver protein powder, then gelatine is added to keep the large silver particles suspended, otherwise they would naturally fall to the bottom.1 So not a good option for vegans or vegetarians. Apparently, this may not be a very successful silver product, predominately because of the large particle size and additives used.

The last type of colloid is called true colloidal silver because silver particles form the majority of the product, from 50-80% and the balance would consist of silver ions. This true colloid is not commonly sold, and the ones that are would be pricey and take time to make a small amount. 1

True silver colloids are products that do not contain any protein or other additives. The silver content is predominantly in the form of nanometre-sized silver particles with less silver ion ratio. 2

Our silver is high-quality which is safer for ingestion.
It contains a higher ratio of nano-particles to silver ions.
(compared to standard ionic silver)

What product should I buy?

With so many colloidal silver products on the market today, it can make it very difficult to choose the right one. Marketing hype has created confusion. Did you know that most “colloidal silver” being sold and made is, in fact, more than 90% ionic silver which is only suitable for topical use. Once inside the body, it becomes ineffective. 3

When ingested, Ionic silver is converted into undesirable silver chloride when it encounters body salts, so may be suitable for external (skin) use only.

PPM readings are not indicative of an effective product

Most colloidal silver is measured via a TDS reader but this is an inaccurate way of measuring the strength of a silver colloid. There are two main reasons for this.

Colloidal silver has been used for over 2,000 years to prevent sickness and heal disease and also widely used in many different applications.

Colloidal silver is known to be a germicide, is anti-bacterial, used as an anti-biotic and for healing benefits also. There are doctors and other science related institutions that support the use of colloid for various applications. 4

Here is a list of what is said about the benefits of colloidal silver: 6,7

We thought it would be a good idea to prove the effectiveness of our colloidal silver when it came to food preservation. We live in a sub-tropical environment, so our climate has high temperatures and high humidity, especially during the summer. These tests we started in autumn. Here are the images I took from the first day of testing, to the longest period of 11 days later. The results were interesting, this is what I found…

I sliced the same apple and placed the pieces in a bowl of water. In this test the apples were exposed to air on the surface, but I made sure the surface was also covered with whichever water they were being tested with. 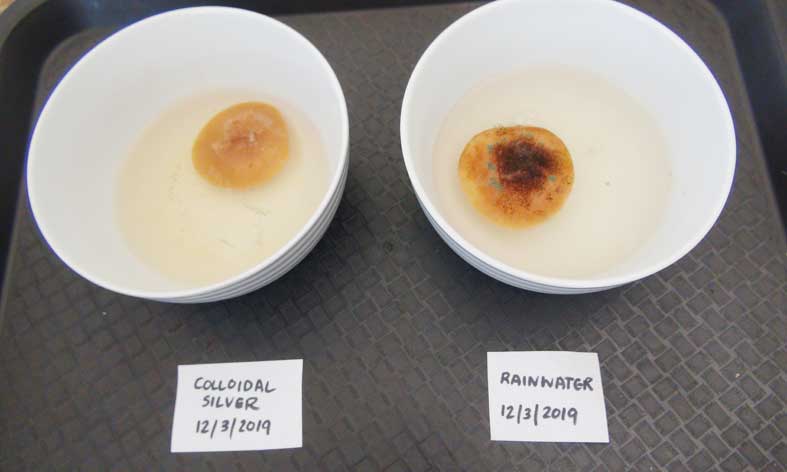 4 days later and the mould is very obvious in comparison to the apple in colloidal silver. When I went to throw them out, I noticed the smell from the slice of apple in rainwater indicated that it was more rotted and fermented than the apple in the colloid water.

As I had the apple exposed to air, I thought it may be a good idea to conduct all further tests in an enclosed jar, so perhaps oxidisation wouldn’t happen so fast. In this test I tried ½ jar of full fat cow’s milk mixed with rainwater to fill, and one mixed with ½ cow’s milk and filled with colloidal water. 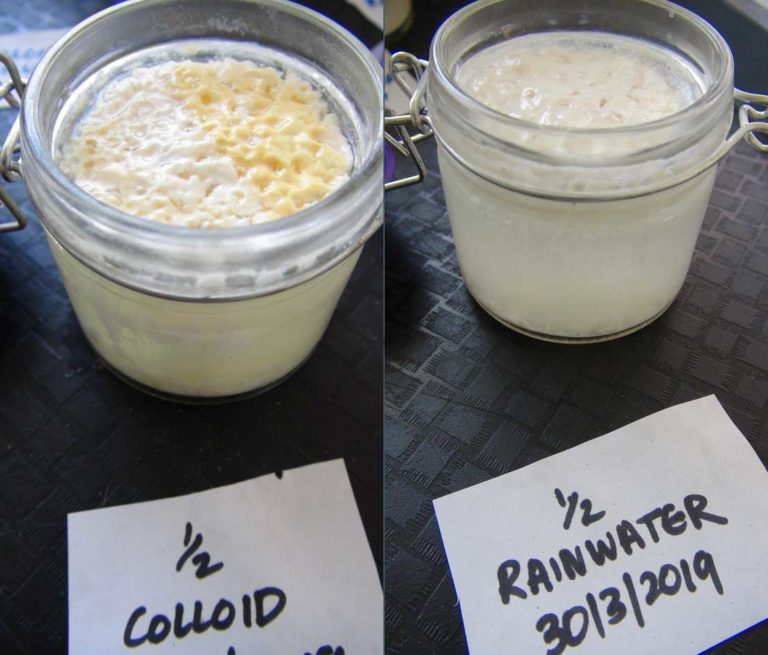 7 days later (above) side by side comparison

7 days later and both were separated, rainwater slightly more. What is interesting about the colloidal example is the light brown film which had developed on top. The rainwater test smelled off, the colloid had a slightly different stale smell.

The grape tests were the longest tests I did, spanning 11 days. Immersing the grapes in a jar filled with colloidal silver and another with rainwater. In the beginning, the grapes sank to the bottom.

There is an obvious difference in water clarity here and the rainwater test has continued fermenting.

With so many colloidal silver products on the market today, it can make it very difficult to choose the right one. Marketing hype has created confusion. Did you know that most “colloidal silver” being sold and made is, in fact, more than 90% ionic silver which is only suitable for topical use? Once inside the body, it becomes ineffective. 3

When ingested, Ionic silver is converted into undesirable silver chloride when it encounters body salts, so may be suitable for external (skin) use only.

To see more of our tests using different foods and to learn more about colloidal silver, visit our article.