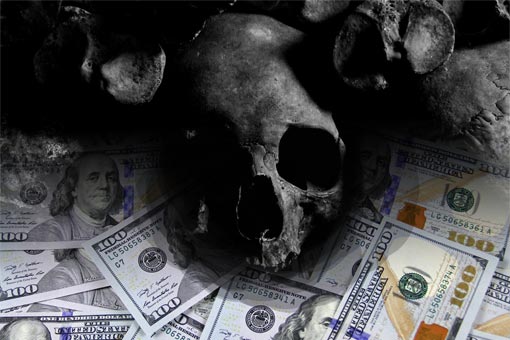 * “Tis impossible to be sure of anything but Death and Taxes”

Is God limited by death and taxes?

Why is there death? Why are there taxes?

Death would be the death of God within.

Taxes would be to a God outside of yourself.

Death and taxes are purely satanic and always have been.

True death is impossible, as life is consciousness and consciousness cannot be destroyed only transformed. What appears as death is a refocusing of the soul/spirit into another realm of existence.

When death is described as a finality to our existence, this is evil.

Taxes are forced upon us, making us slaves to corporation, a false God.

For a lack of knowledge people die and people pay taxes, yet most people never question why.

Are we all slaves? If so, to what?

If you pay taxes or physically die without knowing the God within, then you certainly are a slave to something.

Death is evil, taxes are evil, but these things have been normalised to the point of blind acceptance.

How is reality created, the reality you wake up to everyday?

Most people don’t know the answer to this, so death and taxes are inevitable and in their ignorance they will defend it; they fight for their country but not for the God within themselves or the God within others! So many wars… what ever happened to humanity?

The life Satan has comes from the thoughts and feelings of mankind itself; it is mankind’s creation.

Satan, death and taxes were borne from narcissism, egotism, fear, and the need to control others.

The secret here is to fully understand how reality is created. Once you’ve understood this on an inner level to the point of absolute truth, you will then understand the evil of mankind.

Do you really even know? Do you know to such a level that you now walk, talk and live in bliss?

Government is nothing more than a tiny segment of mankind (the elite) ruling over the rest of humanity through the use of fear, something which they have done for eons.

Death and taxes are inevitable when mankind is ruled by Government.

What if mankind was ruled by God?

Who should rule over you: Government or God?

Government has turned us into slaves. Would God do the same thing?

Empathy never rules over another, it doesn’t know how to. It shares with others, it rules with others but never over others.

God is empathy, it is bliss, it is consciousness itself.

It is impossible for empathy to rule over others. When you understand this then you may understand why God never interferes, why it can’t.

Does this mean that God has abandoned us to this world of evil and now we’re helpless in it?

No, it doesn’t mean that. What it means is that for a lack of knowledge we have abandoned ourselves, our true selves.

Once again, how is reality created?

Eternal Life and Bliss – would that be your calling?

Eternal Life and Bliss for all, would that be your calling?

If so, this is the calling of God.

The author’s rebuttal to the certainty of death and taxes:

“There is only one certainty in life – God” – Kai

Note: Elsewhere on Spiritbeing.life we discuss how reality is created, but for now we hope that we have helped reveal the marvellous truth of the eternal you. The author will attempt to make himself available to answer any serious questions if clarity is required via the Contact Us page, but we are just so busy.

* Uttered by Christopher Bullock during The Cobler of Preston in 1716